As with all other cryptos, the Bitcoin Cash price has seen a considerable slump from its highs this year achieved in late April/early May. The Bitcoin Cash price declined from a high of $1600 to a low of $440 on 21 June. This represents a decline of 75% off the highest price achieved which is probably one of the worst performing cryptos in the Top Ten.However, there have been green shoots of recovery in the past few days although the last 24 hours have seen yet another slump. At the moment the price is trading at around the $500 mark but significant volatility is expected in the short term although bears are still in charge.Short Term Bitcoin Cash Price Prediction: An Assault on $600? 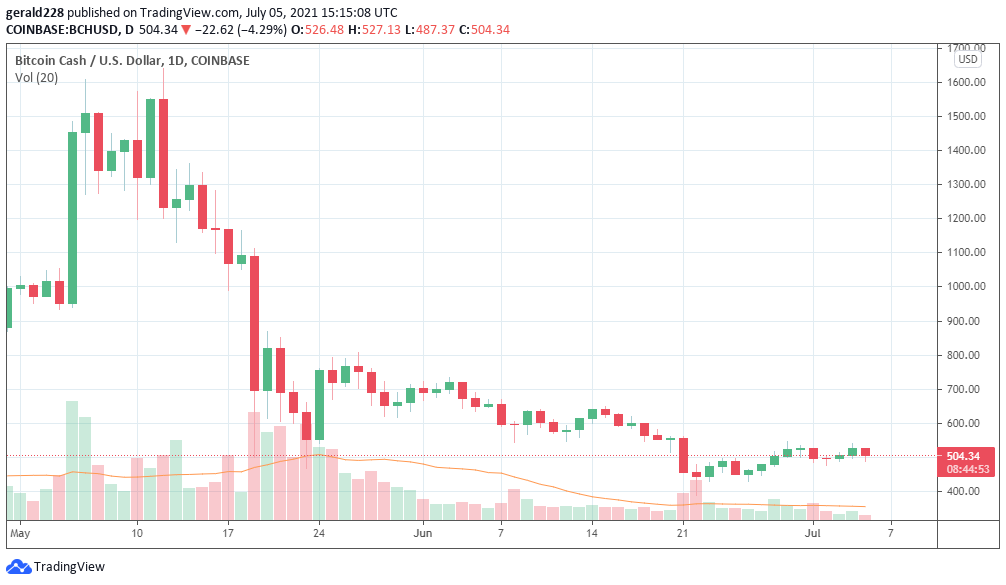 The Bitcoin Cash price saw a rise of around 4% on July 4 from a low of $502 reached the day before. The bearish tendency in the market saw another decline over the past 24 hours with the price dropping another 4% to the $502 level again.If the bulls win over, the price of CH is expected to surge to the $550 level. This would represent a rise of around 20% from the June 21 low but would have to be achieved on the back of substantial bullish pressure.
On the other hand, if the price breaks below $500 again, BCH would descend to the support level of $450 pretty quickly. It would probably see a retest of the June 22 low of $440 again. This bearish thesis would be invalidated if the Bitcoin Cash price remains above $500.Other Factors Affecting BCH: Bearish BitcoinThe Bitcoin price has had a bearish start to the week with a descent from the weekend high of $36,000 to just above the $34,000 mark. Bitcoin appears to have found support at the$34,000 level and if a climb begins, this would mean that the market remains bullish. However, with almost all the major cryptos down the market could see some instability with further declines expected.Long-term prediction for Bitcoin Cash – Will It Regain the $1K Level?Although Bitcoin Cash reached a level of $1,600 in April, it is still a considerable level down from the all time registered in December 2017 where the BCH price had risen to a staggering $4000 level. Those prices seem to be long gone from the market now although there are some predictions that BCH might touch that price in a few years from now.Looking to buy or trade [coin name here]now? Invest at eToro!