The Cardano price seems to be priming itself for another massive move forward. It is currently trading between the $1.32 and $1.34 levels and that represents an impressive gain of 30% from its July 20 low. However, as always there are pitfalls to be expected for the Cardano price before it starts its next big move.As indicated, ADA has been on a massive bullish move forward after having touched lows of $1.04 on July 20. Buying pressure has propelled the Cardano price to a 30% gain and this looks like increasing over the next few days. Although some selling pressure may push the price slightly downwards occasionally, the general trend is definitely bullish.If you haven’t bought some Cardano yet, this would be a good place to start.Short Term Forecast For Cardano Price: The $1.50 Level Is A Realistic Target? 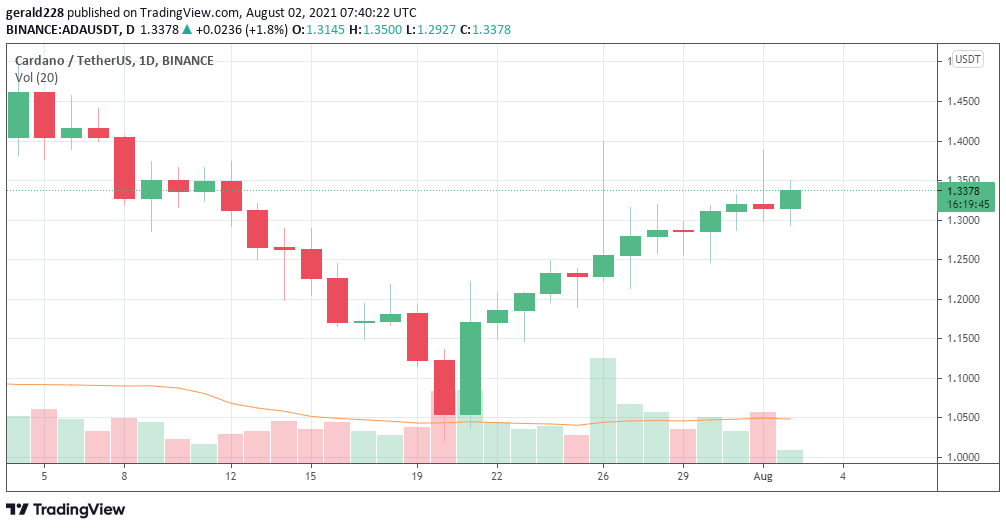 As Cardano hovers around the $1.34 and $1.35 levels its next move should be a 10% gain to the $1.55 level where it may encounter some resistance. That would represent a 45% gain from the July 20 low of $1.04 and with buying strength entering the market, the price could even continue to the $1.70 levels.If a bullish thesis were to prevail, then ADA should be tagging the $1.50 mark over the next few days. However, it would first have to overcome some strong resistance at the $1.40 and $1.45 levels. Buyers seem to have entered the market though and bears have been quite absent of late so this should be the logical move forward.A bearish thesis would however invalidate this bullish streak, however this is unlikely. If that were to occur, the Cardano price would drop to the $1.25 level rather fast after having broken the $1.30 support mark. A sell off could then push the price close to $1.20 again and even the teens may be revisited.If you haven’t started trading crypto yet, then it would be useful to take a look at these .Long Term Forecast For ADA: Bullish Streak Should RemainAlthough the Cardano price has seen a 60% decline since its late April/early May high, a recovery seems to be well on its way. Long term, ADA is expected to end the year at around or close to the $2 level. As always, that rather depends on market sentiment, but that seems to be very positive at the moment.With the Cardano smart contract technology constantly being disseminated, the long-term future of the project seems assured. It seems to be only a matter of time before ADA starts to become mainstream as a use case for smart contracts on the blockchain. This can only have a positive effect on the Cardano price long term.Looking to buy or trade Cardano now? Invest at eToro!Capital at risk