Ethereum price looks set to continue its recovery after bouncing considerably overnight. The by market cap had descended to below the $1800 level over the weekend.There were fears that bearish sentiment would continue dragging the price down to the $1,500 mark but bulls appear to have taken control again. Ether rose to the $2050 level and is currently trading between the $2050 and $2100 mark. 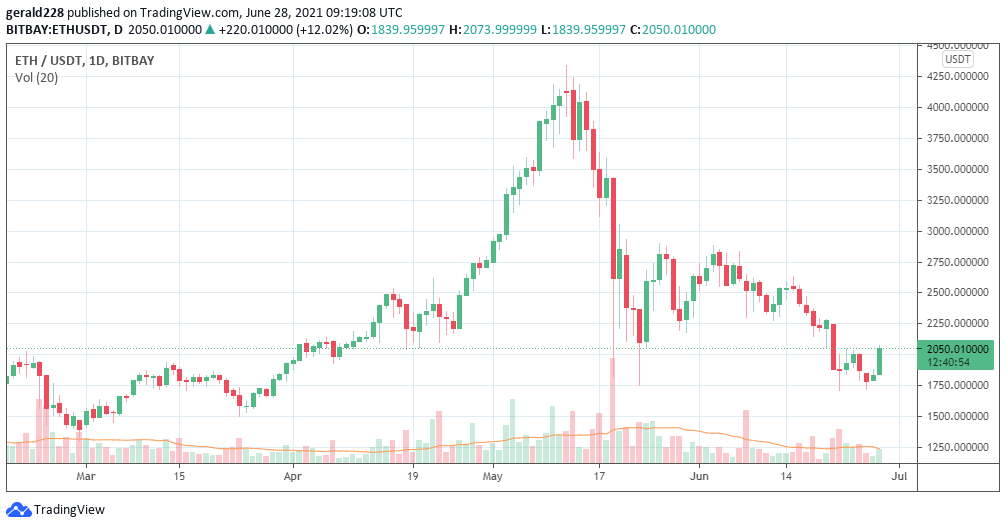 Ethereum Short Term Price Outlook – Further Gains PossibleEthereum is making another attempt to break above its downtrend. Currently trading at $2060, this is around 8% up from its recent low of $1750. However, the current price is still around 5% down over a 7-day period. Ethereum’s market cap is at the $230 billion mark with a market dominance of 16.5%.The Ethereum price has been consistently going south since May 14. After registering an all-time high on May 12th, the descent began two days later and it is now well over 50% down from the all-time high of $4600. There was an attempt to break out of the trend line on June 15th when the price careened all the way down from $2695 to $1650 on June 22.However, since that low less than 7 days ago, Ethereum has recovered considerably with an increase of around 20%. The resistance of the descending trend line is now much lower so in theory, this is far easier to pass.Medium Term Price Forecast – Is Ether Breaking Out Of A Downtrend?According to the 4-hour chart, Ethereum has now formed a strong support level at around $1,700. This should be seen as a benchmark support level. If this is broken, then Ethereum should continue descending but if the price maintains its uptrend, it could go all the way to $3000.Trend line resistance for Ethereum has been established at the $1980 mark. What is also positive for the coin is that it has managed to rise well above the 50-day moving average of $1949.The price will have to gain convincing traction above this trend line if the bullish momentum were to continue. There remain significant obstacles at $2172 and $2392 which are the 100 and 200 DMA’s respectively.Long Term Outlook For EtherThis is the fourth attempt by the world’s second largest cryptocurrency by market cap to break out from its descending trend line. One has to closely observe how much legs this rally has got but if there is strength, the price could easily reach the $2900-$3000 range in a few days and top that long term.However, there is a significant stumbling block for that to be overcome. And that’s prevailing crypto market sentiment which is pretty negative at the moment. One has to wait and see if this is just a flash in the pan or if Ethereum has finally turned a corner.Looking to buy or trade Ethereum now? Invest at eToro!Capital at risk