Ethereum Price Surges Above $2,700 Ahead of London Hard Fork Launch

The Ethereum Price has rallied 8.7% from $2,497 to $2,730 as buyers pushed ETH beyond the $2,700 psychological level shattering the 100-day Simple Moving Average (SMA). This bullish momentum pushed Ethereum to highs of around $2,770 on Wednesday as investors await the much-publicised Ethereum London Hard Fork to go live later today.Around 75% Of Ethereum Nodes Ready For London Hard Fork 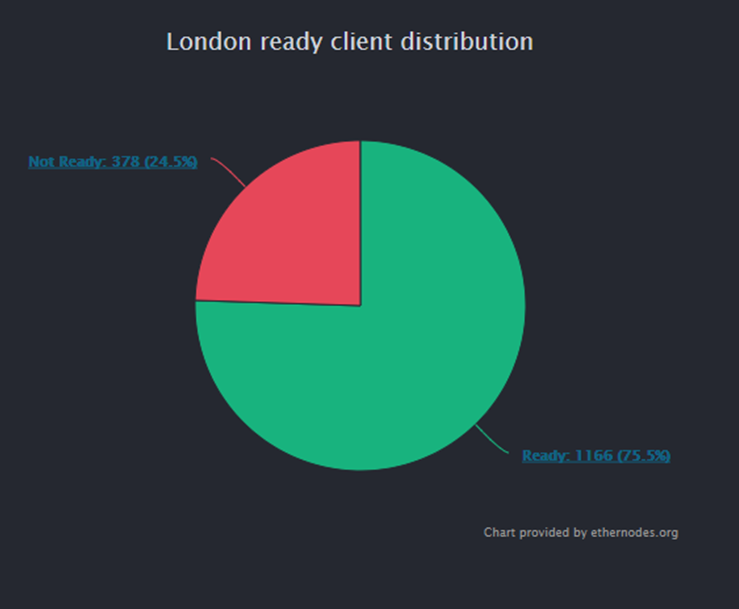 According to statistics from , approximately 75.5% Ethereum nodes were reported to be ready for the launch of the Ethereum London Hard Form that is set to go live later today. The London upgrade is planned to take place on the height of the block 12,965,000 block.The London upgrade introduces five key EIPs or Ethereum Improvement Proposals such as the EIP-1559, EIP-3198, EIP-3529, EIP 3541, and EIP-3554.One of the most awaited improvements is the EIP-1559 which is expected to make Ethereum less inflationary. This introduces a base fee attached to every transaction happening on the Ethereum blockchain. Though this sounds rigid, it helps users to approximate the fee. The current fee system operates in some way like an auction house, meaning people tend to overpay for their transactions to be prioritized.It remains to be seen how the Ethereum community will respond to the Ethereum London upgrade. For example, it could significantly impact miners who could see their revenues reduce by up to 30%. This is because miners will only keep the priority fee as long as the Proof-of-Work approach is still in use, as part of their fees will be burned.Ethereum Price Trades Above the $2,700 MarkAt the time of writing, the Ethereum price hovers around $2,701 on and appears to be battling immense resistance around $2,750.Note that ETH needs to close the day above this $2,750 level to confirm a bullish bias. If this happens, Ethereum price could surge above the $3,000 psychological level. Greater ambitions and positive bullish sentiment that may come with the upgrade could bolster the ETH price to the May All-Time-High (ATH) around the $4,400 zone in the longer term.Ethereum Price (ETH/USD) Daily Chart

This bullish narrative is accentuated by  the movement of the Moving Average Convergence Divergence (MACD) line (blue) above the signal line as seen on the daily chart. Moreover, the position of the MACD above the neutral line in the positive region adds credence to this bullish thesis.Furthermore, the Relative Strength Index (RSI) movement towards the oversold zone shows that the bulls are in control of Ethereum price.

Looking Over The FenceNote that if the Ethereum London Upgrade fails to trigger a bullish run, ETH could fall back towards the $2,550 support wall at the $100-day SMA.Looking to buy or trade crypto now? Invest at eToro!Capital at risk