Main Page » Analytics » EUR/USD locked in a tight range and ready to explode, more likely to the downside – Confluence Detector

EUR/USD locked in a tight range and ready to explode, more likely to the downside – Confluence Detector

EUR/USD has been on the back foot following a risk-off mood stemming from worsening relations between the US and China. Where next? Technicals are pointing to strong support and resistance lines in the immediate vicinity of the current price. Once the currency pair picks a direction, it may move quickly. To which direction? Resistance looks more robust than support.

If it breaks higher, it has room to run, targeting 1.1028, which is the convergence of the Fibonacci 61.8% one-month, the Pivot Point one-week Resistance 1, and the PP one-day R2.

If it loses that level, the next cushion is only at 1.0886, where we see the previous monthly low, the previous weekly low, and the PP one-day S3 meeting up.

Here is how it looks on the tool: 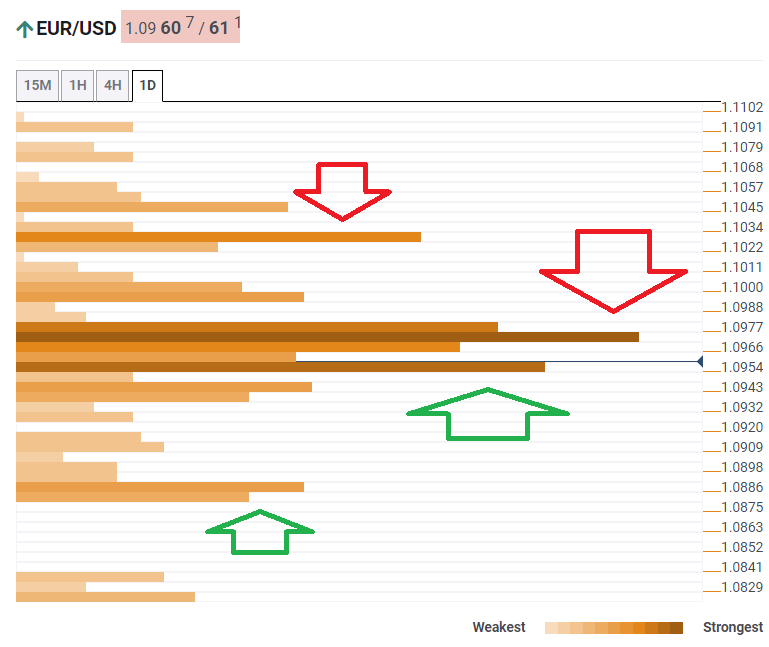 The Confluence Detector finds exciting opportunities using Technical Confluences. The TC is a tool to locate and point out those price levels where there is a congestion of indicators, moving averages, Fibonacci levels, Pivot Points, etc. Knowing where these congestion points are located is very useful for the trader, and can be used as a basis for different strategies.

This tool assigns a certain amount of “weight” to each indicator, and this “weight” can influence adjacents price levels. These weightings mean that one price level without any indicator or moving average but under the influence of two “strongly weighted” levels accumulate more resistance than their neighbors. In these cases, the tool signals resistance in apparently empty areas.