The EUR/USD pair closed at $1.1835 after placing a high of $1.1839 and a low of $1.1772. The direct currency pair gained support and reversed its movement to post gains for the day. The currency pair remained green throughout the day after declining consecutively for the previous two sessions amid the renewed weakness in the U.S. dollar.Dovish Jerome Powell underpins the EUR/USDThe Federal Reserve Chairman Jerome Powell testified before Congress a day after a stronger-than-expected consumer inflation report. Powell reassured investors that the Federal Reserve would continue supporting the economy despite a hotter inflation reading last month.He noted that the recovery in the U.S. economy has not yet reached the level set by Fed to start easing massive monthly asset purchases by the central bank.Powell further added that the U.S. job market was still far from reaching the level that would trigger Fed to start easing stimulus measures. However, for the rising consumer prices in June, Powell said that it was temporary and was an effect of economic reopening. They further said that prices would likely continue to rise in the coming months. These dovish comments from Jerome Powell added weight on the U.S. dollar that dragged DXY down to 92.34 level and pushed EUR/USD currency pair higher.Weaker European Industrial Production Weighs on EuroAt 14:00 GMT, the Industrial production from the whole Eurozone for May declined to -1.0% on the data front. It missed the forecasted -0.3% and weighed on the single currency Euro that capped further gains in EUR/USD. From the U.S. side, at 17:30 GMT, the Producer Price Index for June increased to 1.0% against the anticipated 0.6% and supported the U.S. dollar that further capped gains in EUR/USD pair. The Core PPI from June also increased to 1.0% against the forecasted 0.5% and supported the U.S. dollar that limited the upward momentum in EUR/USD. On the other hand, the ECB board member Isabel Schnabel said that the ECB needs to see higher core inflation before changing its outlook and tightening Wednesday. She added that the inflation overshoot might result from the Governing Council exercising patience in adjusting its policy stance during an improved outlook.Furthermore, on Wednesday, the European Central Bank announced that it started creating a digital currency as more consumers were ditching cash. ECB revealed that the project would prolyl take two years to complete, and the idea was to design a digital version of the common currency used in 19 members of the eurozone.Moreover, the actual implementation of CBDC could take another two years after the completion of the design and investigation stage. This announcement from ECB also added support to the single currency Euro and added further gains in EUR/USD.EUR/USD Forecast: Trendline Extends Resistance at $1.1850 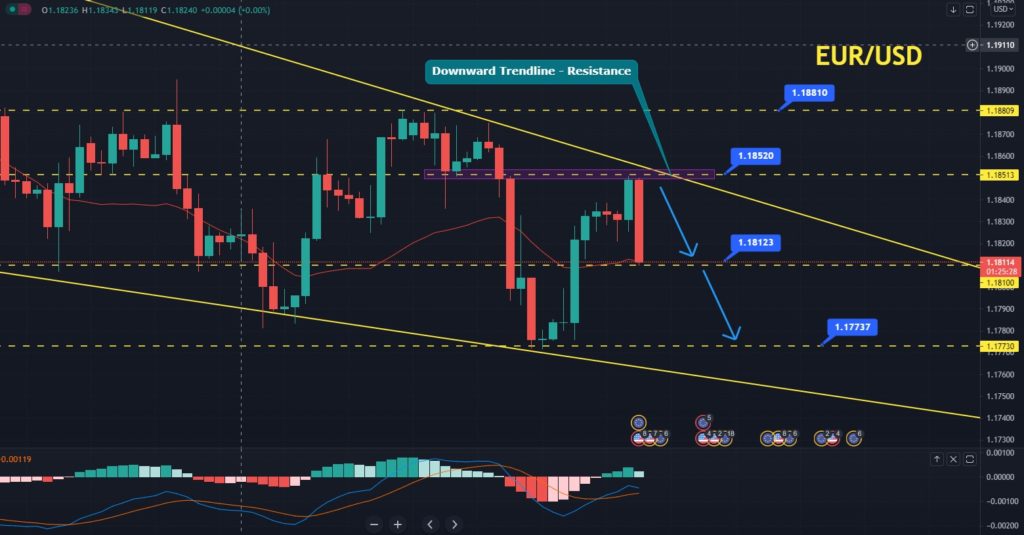 Looking to trade forex now? Invest at eToro!67% of retail investor accounts lose money when trading CFDs with this provider. You should consider whether you can afford to take the high risk of losing your money.