Forex Forecast: What’s The Outlook For DXY After Powell Dovishness?

The DXY index has continued its slow recovery this month climbing to 92.25 on 18 June although its retreated slightly after . It seems that the Federal Reserve will begin to tighten monetary policy in the short to medium term and that undoubtedly will have an effect on the .Other factors are coming into play that may affect the DXY. The Far Eastern currencies such as the JPY may be affected by a stronger dollar. We are also seeing a considerable global economic rebound in the West as the Covid19 vaccination programme gathers pace and restrictions are lifted. Conversely, Asia is lagging behind in vaccinations so that recovery may be a sticking point.Let’s take a look at how these multiple factors will be affecting the DXY index in the short to medium term. 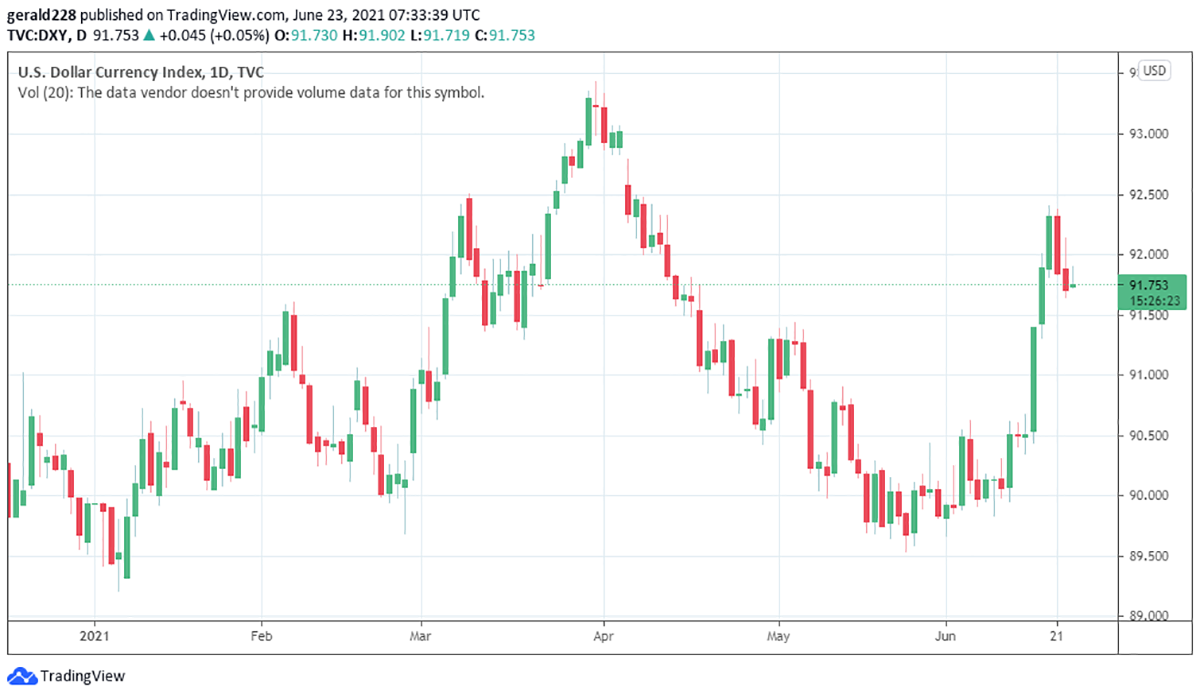 Powell’s Statement to Congress – Cautious But ConfidentIn yesterday’s testimony, Powell noted that the economy was growing at a considerable rate but threats remain. These are chiefly due to the Coronavirus pandemic still very much alive. Rising inflation pressures are also expected to becoming less prevalent over time, he added.Powell said that continued support by the Fed would definitely continue based on the policies currently in place. He mentioned the continued pace of vaccinations adding that real GDP this year was expected to post the fastest increase in decades.Interestingly this statement came at a time when President Biden had to admit that the US would not be reaching its target of 70% of adults partially vaccinated by July 4. The slightly on that news.Dovish monetary policy reiterates ‘transitory’ inflationThe dovish tone of the Fed chairman has dampened fears that the central bank was moving aggressively on monetary tightening or would start tapering its asset purchases. That seems to be have been exactly what forex traders want to hear.“We will not raise interest rates pre-emptively because we think employment is too high [or]because we fear the possible onset of inflation. Instead, we will wait for actual evidence of actual inflation or other imbalances.”, he told Congress.However, the US dollar has only given back some of its gains from last week (see chart), which suggests the break out from the descending channel seen since April has some permanence to it.But Powell did say he would be waiting on actual evidence of higher inflation to emerge and that it was still unclear exactly when inflation would start to moderate, so DXY and USD pairs traders will be eagerly following CPI and other price data for indications of Fed positioning on policy.Global Economic Rebound – Is It Really Happening?Since the DXY is made up of a basket of six currencies of the world’s major economies (the main internationally traded currencies), economic performance in these countries is crucial to the performance of this index. The UK has seen a considerable success rate with regards to its vaccination rate. But the resurgence of the Delta variant is quite worrying and could have considerable effect on its recovery.There are also issues with the extremely slow rollout of vaccines in countries such as the Philippines, Thailand and Japan. The previous two depend on the US dollar up to a certain point especially for foreign remittances.  India is still very much in the throes of the virus with only around 5% of its population vaccinated. A strong US dollar will definitely have an adverse effect on these countries’ economic reopening.Short And Medium Term Indicators For DXYAt present, the DXY index is hovering between the 91.7 and 92.2 mark, which means that the dollar is historically lower than it was when the index started out in 1973. However, the current value is a considerable increase from the 6th of January when it was at a low point of 89.1.As the global recovery gathers pace, the value of the DXY should . Although inflation is currently rising at a fast rate, Powell, seems confident that this will settle at their 2.0% target.The Coronavirus Pandemic and The DXYThere has been a slow decline in the number of worldwide cases largely due to the vaccination programme. Stil, the is still very much with us. Asian countries are particularly suffering especially with low vaccination rollouts.The virus is surging in Indonesia which is seeing record amounts of cases per day. This is the world’s fourth largest country by population and a considerable economic behemoth. Understandably, a lagging economic recovery could have considerable effect on the DXY, as demand will remain low for the dollar.And after huge initial success in controlling the virus, South Korea is also lagging behind on vaccinations. This will also have an effect on the global economic recovery.UK And Euro Blues For The DXYThe UK has had to postpone its full re-opening by four weeks due to the resurgence of the Delta variant. That has had an effect on pent up demand being held up yet again and causing more economic fatigue. Additionally, the Brexit issue over Northern Ireland has had a bad effect with relations between London and Brussels going further South.The Covid situation in the EU is of a slightly rosier picture. Mask wearing restrictions have been dropped in France and Italy with other countries seeing consistently lower-case rates. Vaccination rates have conversely increased. This will lead to a long-term strengthening of the Euro and probably a converse sight retreat in the DXY value.Conclusion: Where Goes The DXY?As the global economic recovery continues, the DXY should begin to rise in value and might even make 100 by the end of the year. However, there are several factors in play as we already indicated. The Covid19 pandemic is still alive and kicking in many countries, especially in Asia.Although the vaccination programme has had considerable success in the UK, the resurgence of the Delta variant there is still worrying. In the European Union, the speed of the vaccination programme has begun to catch up. However relaxation of restrictions too soon could bring about a resurgence in cases.All in all it’s a finely balanced act but as more countries start opening up their economies. Still, pent up demand should make the difference.Looking to buy or trade forex now? Invest at eToro!67% of retail investor accounts lose money when trading CFDs with this provider. You should consider whether you can afford to take the high risk of losing your money.