“We are witnessing the end of hope in Boris as a second-term PM” – a comment from an unnamed Conservative MP reflects the gloomy mood as infighting around Prime Minister Boris Johnson continues. Dominic Cummings, the controversial senior adviser – and architect of the Vote Leave campaign – is on his way out.
The government has come under growing criticism for its handling of the coronavirus crisis – especially the belated announcement of a second nationwide lockdown. Under Keir Starmer, the opposition Labour Party has been more effective at tapping into public anger, and knives are out also among Tories. The recent rows in 10 Downing Street may weigh on sterling.
The latest political scandals overshadow success in other disease-related areas. Britain has secured deals with six pharmaceutical firms that are developing vaccines, including UK-based AstraZeneca. Moreover, recent statistics are pointing to a flattering of the case curve. 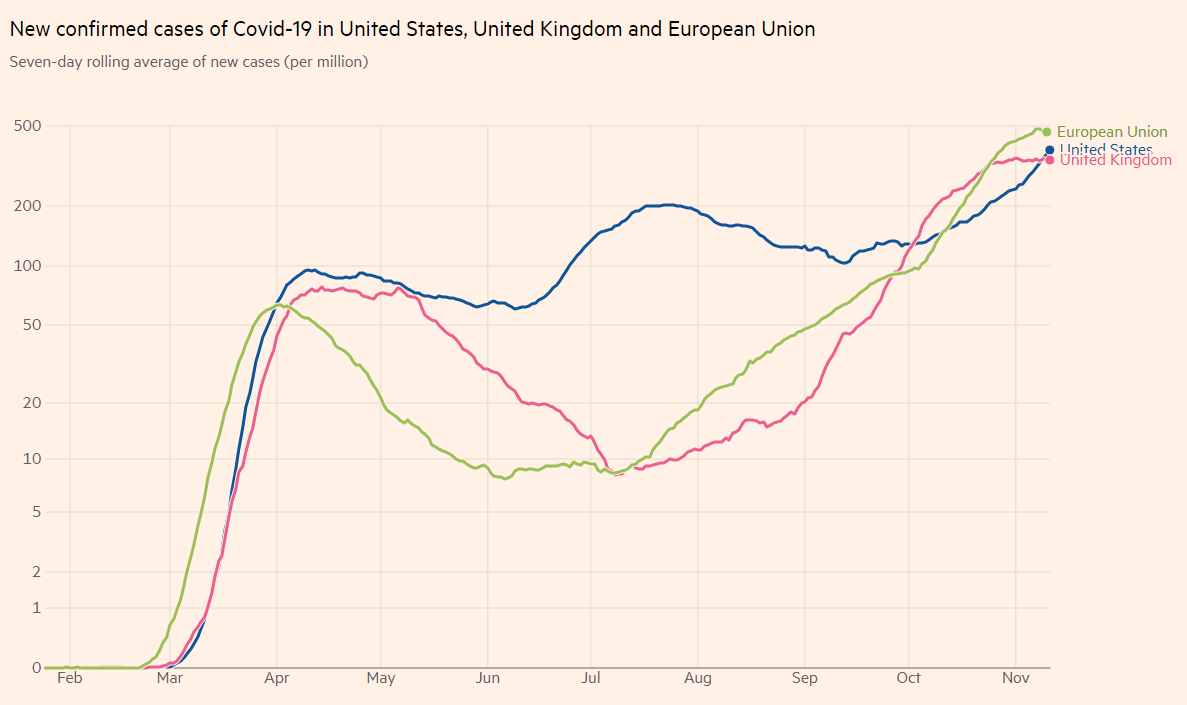 Source:
After the EU and the UK failed to reach a deal earlier this week, talks have gone quiet – which may be a positive sign. Deliberations continue in London and both sides tend to release statements toward the end of the week. Fisheries and state aid remain the areas of contention, yet some reports suggested the “bending of red lines.” Markets are aware of the only genuine deadline – year-end when the transition period expires.
The US dollar is losing some ground alongside yields on 10-year Treasuries as markets calm following stormy days. Excitement about the upcoming vaccine made way to concerns about the devastating impact of the winter wave. Thursday’s statistics pointed to a record of 150,000 cases and 69,000 hospitalizations.
More
Republicans are gradually coming around to acknowledging President-elect Joe Biden as the winner of the elections. While President Donald Trump is unlikely to concede, the chances of a contested election have further diminished. Several networks have called Arizona for Biden, following the footsteps of Fox News and AP which did it early on.
Later in the day, the University of Michigan’s initial Consumer Sentiment read for November is of interest. It is set to edge up, yet remain far from pre-pandemic levels.
See
Overall, if it weren’t for Johnson’s political issues, sterling could have been higher.
GBP/USD Technical Analysis