After a tentative start to the first trading session of the week, sterling is finding its footing against the US dollar.GBP/USD is at 1.3861 at the time of writing.The more than 2% rise in the dollar against major currencies last week may have taken the buck into overbought territory, and sterling is feeling the benefit of that, but the bears have not gone into hibernation just yet.Continued strength is likely to still weigh on other major, including the pound, this week.Jerome Powell will have more to say on the new hawkishness at the US Federal Reserve, with the US central bank now planning to move to dampen inflation more forcefully than hitherto expected.Bank of England MPC meeting on tap ThursdayBut sterling watchers will have their eyes set on the news flow from the Bank of England, starting Thursday.Market participants will be looking for any indications of a similar shift in stance by the BoE on inflation.Interest rates will stay unchanged as will other policy measures but  with May year on year inflation now at 2.1% compared to 1.5% in April, with some expected a rise to 4% by year end, the question is what will BoE do to being price rises back below its 2% target?UK Flash PMI is up on Wednesday with the forecast  for manufacturing and services 64 and 63 respectively. That represents an expected fall for manufacturing, from 66.1 last month and a rise on the services PMI from 61.8 last month.Fitch revises UK outlook upwards to stableAny weakening in expansion could help trigger selling of the pound because of the less clear backdrop for the economy presented by the refusal of Brexit to go to bed and the emergence of the Delta variant despite the country’s vaccination successes to date. Having said that, ratings agency Fitch has revised upwards the UK. outlook.Reuters reported: “Fitch Ratings has revised the Bank of England’s (BoE) Outlook to Stable from Negative, while affirming the Long-Term Foreign-Currency (LTFC) Issuer Default Rating (IDR) at ‘AA-‘”Last week, UK retail sales data came in weaker, unexpectedly falling 1.4% between April and May.Traders remain worried by the deadlock between the UK and EU over the Northern Ireland protocol and the implications for trade disruption should the negotiations deteriorate further. 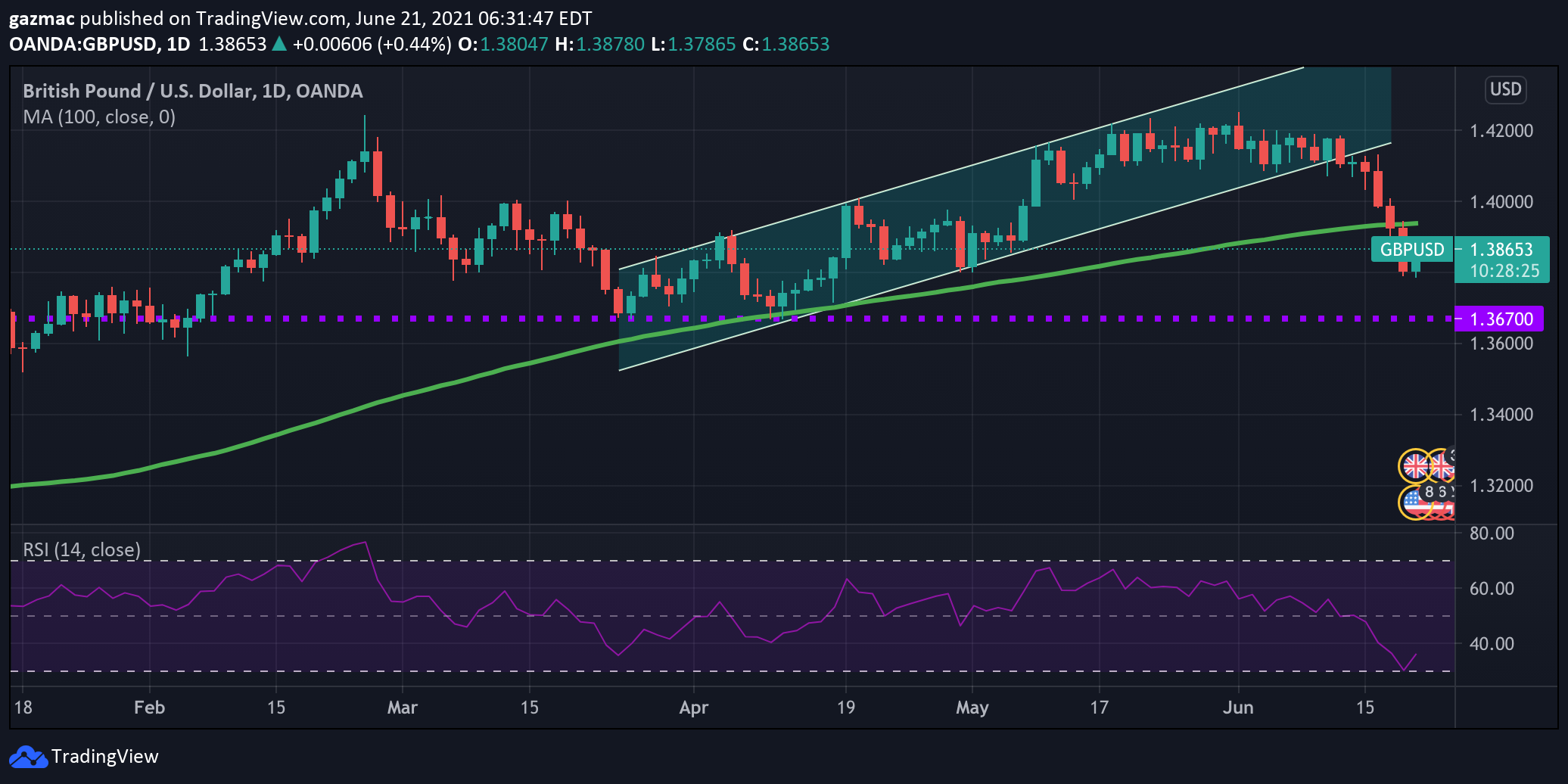 GBP/USD technical analysisGBP/USD is now trading outside of its channel established since  the end of March, having taken what looks like a decisive turn lower on 11 June. That action marked the beginning of sterling’s largest fall since September last year. However, the RSI is flashing oversold and today’s action has seen sterling initially strengthen.If fails to hold at current levels, the road may well be open to a fall to the 1.3670 region where support near-term support should be in evidence.Fears that third wave of the pandemic is just beginning is troubling traders today, with three days in a row of new infections running at over 10,000.Friday’s musings from St. Louis Fed President Bullard set alarm bells ringing when he said rates should start rising next year.That of course came after the the Federal Open Market Committee’s (FOMC) brought forward hike expectations to two rises in 2023 and that it would start at the least, talking about tapering its bind buying programme, currently running at $120 billion a month. The US dollar index (DXY) jumped the most  seen in three months.As the market awaits the BoE MPC decision on Thursday, GBP/USD traders may be cautious of making too bold a move, so that could limit selling pressure over the next few days.Get Free Forex Signals – 82% Win Rate!3 Free Forex Signals Every Week – Full Technical Analysis