Main Page » Analytics » GBP/USD: Covid and Trump could cut off the Brexit bounce

GBP/USD: Covid and Trump could cut off the Brexit bounce

Dual Brexit and US fiscal stimulus talks continued to dominate cable’s trading, resulting in choppy trading, an eventual breakout to the upside, and a retreat afterward. US politics are set to take over in the pre-elections week, while UK coronavirus cases and lockdowns will probably become more prominent.
This week in GBP/USD:
Brexit is back: The EU and the UK have continued negotiations – on the phone instead of face to face and at various intensity levels. The ongoing communications have kept the pound bid despite posturing. Sterling surged when both sides announced a formal return to formal – and intense – talks, now with a new deadline of mid-November.
Beforehand, Prime Minister Boris Johnson told the nation to prepare for a no-deal Brexit. While investors are aware that the only genuine deadline is December 31 – when the transition period ends – headlines remained prominent in shaking the pound.
The PM has had to divide his time between attending Brussels and Britain, which is suffering from a surge in coronavirus cases. Wales entered a strict lockdown, and Manchester was also forced to harden its measures after a public row that aired north-south grievances and diminished Johnson’s political credit.
Gertjan Vlieghe, a member of the , responded to the increase in COVID-19 infections and lockdowns with dovish comments. He said that the outlook risks are skewed toward adding more stimulus and dismissed concerns that negative are unproductive.
The BOE has been flirting with the idea of setting sub-zero borrowing costs for long months, and every move toward such a policy has weighed on the pound.
UK Retail sales exceeded estimates with a leap of 1.5% in September, showing the British consumer’s resilience just before covid cases began surging. Markit´s preliminary purchasing managers´indexes were mixed.
COVID-19 cases in the US and the UK 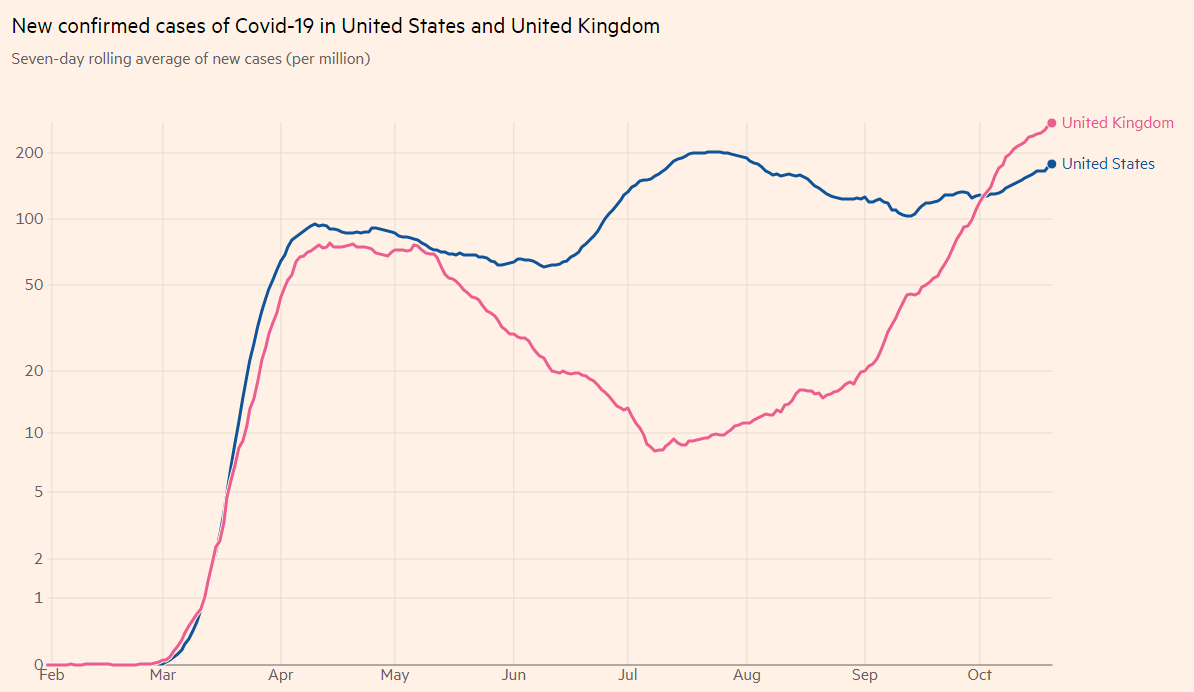 Source:
Infections are rising in the US and may have contributed to a push by President Donald Trump to accelerate talks with Democrats over a new stimulus bill. At the time of writing, both sides reported progress, and House Speaker Nancy Pelosi even stated that they are “putting pen to paper.” The safe-haven dollar has been retreating on such comments.
On the other hand, Senate Republicans are reluctant to sign off on massive spending and are focused on the Supreme Court. Moreover, time is running out to pass a deal through Congress before November 3, election day.
President Donald Trump seemed to marginally narrow the gap against rival Joe Biden, in polls preceding the debate between the two septuagenarians. Markets continued speculating on a “blue wave” – full control for Democrats that would allow for a generous relief package.
Election tensions are set to rise.
UK events: Lockdowns > Brexit?
The saga has been going for over four years, and with two months left until the UK ceases to be a de-facto member of the EU, any headline could rock markets. The end of October was one of the deadlines for reaching a deal, but the data will likely come and go without a deal.
Nevertheless, any comment on progress could boost sterling, and a total stall of negotiations would hurt it. The main topics of contention are state aid and fisheries – the latter being a minuscule yet politically significant sector.
On the other hand, the increase in COVID-19 cases and the ensuing lockdowns are moving rapidly. If Liverpool’s Tier Three restrictions succeed in flattening the curve, it could serve as an encouraging sign, boosting the pound. On the other hand, if additional regions enter the highest lockdown level, especially London – sterling could suffer.
With a relatively sparse UK economic calendar, speculation about the economy’s impact and the BOE’s potential action will probably rise. The bank is scheduled to release its Monetary Policy Report and announce its rate decision the following week. How close is the “Old Lady” to negative rates?
Here is the list of UK events from the  calendar:

US events: Election fever and also GDP
The pre-election week is set to focus on the campaign. An influx of post-debate opinion polls is likely early in the week. While national surveys grab the headlines, what counts is battleground states. Polls from Pennsylvania – the closest of the northern states that Trump won narrowly in 2016 are of high importance.
Based on state polls, Biden still has a significant chance of winning:

Source:
Florida, the perennial swing state, is also critical as it sends a large number of electors, is highly contested, and counts early votes ahead of election day. If Biden wins Florida, the race is all but over. However, if Trump carries his new home state, the race is considerably closer.
The upper chamber is more closely fought. Here is The Economist’s projection for the Senate:

Source:
Political analysts are ready for an “October surprise” – an earth-shattering event that shakes up the race. Dozens of millions of Americans have already voted, limiting the impact of such a sudden shift, and there are fewer undecideds in 2020 compared to 2016. And while it is impossible to speculate about an “unknown unknown,” the coronavirus crisis is a “known unknown” that could have a last-minute impact.
Cases are rising in colder states, with the battleground of Wisconsin standing out. Will the disease depress turnout and favor Trump? Will it shed more light on his mishandling of the crisis and push voters toward Biden? The increase is known; the impact remains a mystery.
The economic calendar is relatively busy. Durable Goods Orders for September are set to print modest changes. Investors are eyeing Nondefense ex-air spending, considered “the core of the core.” These investment figures feed into Gross Domestic Product calculations for the third quarter.
After an annualized collapse of 31.4% in second-quarter GDP, a bounce of a similar magnitude is on the cards now. It is essential to remember that output also dropped in the first quarter and that a return to pre-pandemic levels is still lagging.
The first release tends to have more impact than revisions and is set to impact future stimulus calculations, allowing it to impact markets despite tensions ahead of the vote.
Friday’s Personal Income and Personal Spending statistics for September are also of interest. The lack of additional government support could weigh on income.
Here the upcoming top events this week:

GBP/USD Technical Analysis
Pound/dollar has broken above the 50-day Simple Moving Average and benefits from upside momentum on the daily . It is also trading above the 100 and 200-day SMAs. The next hurdle for bulls is surpassing the uptrend resistance line, which has been accompanying GBP/USD since mid-September.
Cable is battling 1.3080, the previous October high. Looking up, strong resistance is at the recent peak of 1.3175. Further above, 1.3270 is the confluence of the uptrend resistance line and a high point in August. It is followed by 1.3395.
Support awaits at the round 1.30 level, which nearly converges with the 50-day SMA. Next, 1.2880 was a low point in mid-October and meets the 100-day SMA. It is followed by 1.2665, September’s trough.

GBP/USD Sentiment
Talking does not mean agreeing – the recent Brexit-related rise could fade. Moreover, uncertainty about the US elections could send the safe-haven dollar higher. Overall, it is hard to see further advances, despite upbeat technicals.
The  is showing that investors are bullish in the short term and the long-term, but see a dip in the medium term. The figures reflect a potential for dollar strength after the US elections, on fears of an inconclusive vote.