Boris Johnson may have his cake and leave it whole after all – or at least almost whole. Arlene Foster, leader of the Northern Irish Democratic Unionist Party (DUP), has opened the door to align the region with European norms. Foster proposed the new approach after holding an unexpected meeting with Irish PM Leo Varadkar.

Her new stance may open the door to avoiding new borders on the island of Ireland while allowing the rest of the UK to leave the EU’s customs union – a clean or hard Brexit – depending on one’s point of view.

The party previously vehemently opposed making any differentiation between the province and the rest of the UK – as that would endanger the union of four nations that is critical to the party. The UK Conservative Party was dependent on the DUP’s external support for a majority in parliament – until the recent “civil war” which saw expulsions and abandonment as Tory members voted with the opposition to block a no-deal Brexit. As prime minister Boris Johnson lacks a majority even with the DUP, the small party seems to adapt to reality.

Moreover, Tory members that brought Johnson to power are focused on Brexit and see leaving the UK as more t important than preserving the union. The PM is the leader of the Conservative and Unionist Party – and officially seeks to maintain the union. However, he may have to change his mind sooner rather than later.

EU leaders have given the PM a deadline – September 30 – by which the UK must bring concrete written proposals to the table. That would leave sufficient time to iron the details out ahead of the EU Summit on October 19. The tough stance has come as Europeans have become frustrated with the UK. Michel Barnier, the bloc’s chief negotiator, said that “we should not be spending time pretending to negotiate” in a rebuke to Johnson. Luxembourg PM Xavier Bettel also expressed his frustration after meeting his British counterpart earlier this week.

While Brexit remains in the spotlight, the Bank of England´s rate decision is also set to rock the pound. Economists expect the BOE to leave its rate unchanged at 0.75% as uncertainty paralyzes policymaking. Economic data have been mixed – wage growth has accelerated, but inflation has slowed down. The bank has previously expressed its intention to raise rates gradually – once it receives clarity about Brexit. If Governor Mark Carney and his colleagues abandon their hawkish stance, GBP/USD may fall.

The BOE’s decision comes less than 24 hours after the US Federal Reserve cut interest rates by 25 basis points as expected. The announcement revealed splits, with two members for leaving rates unchanged and one voting for a 50bp cut. The Fed’s forecasts for the development of interest rates has shown that members see no further reductions this year or the next. However, Jerome Powell, Chair of the Federal Reserve, said that the bank would act according to developments and the data. 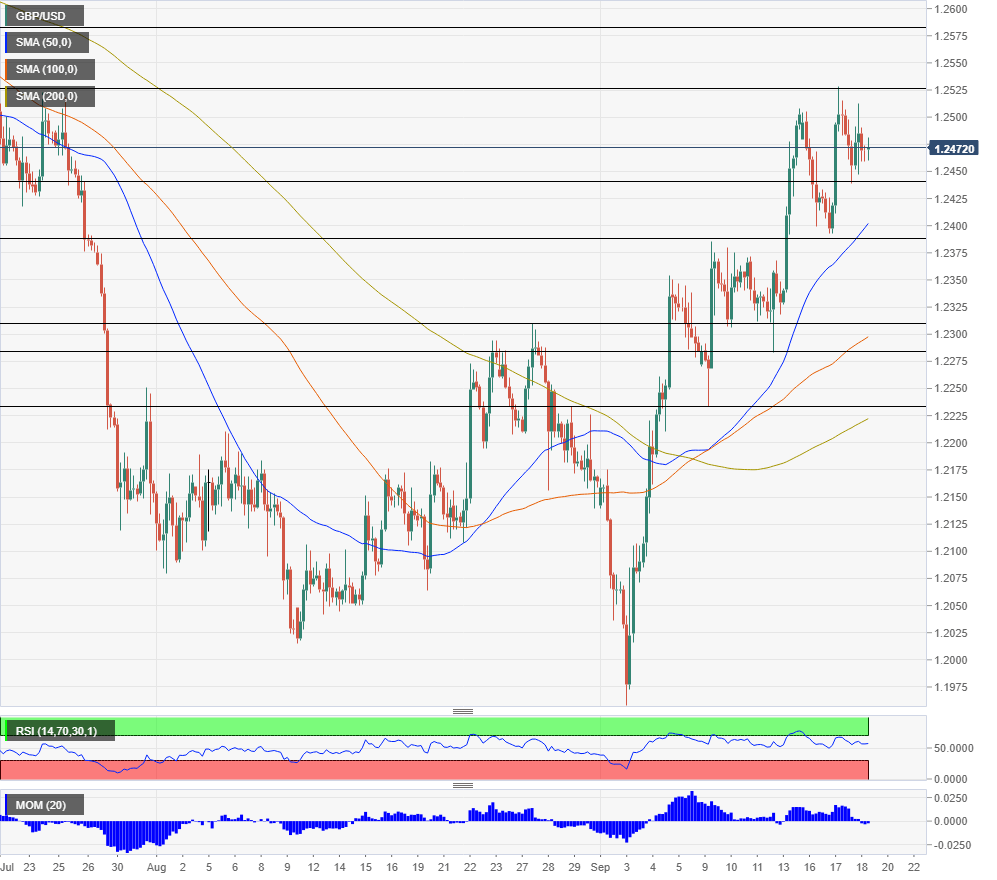 GBP/USD is trading above the 50, 100, and 200 Simple Moving Averages – a bullish sign. On the other hand, momentum has turned negative, albeit only just. All in all, the picture remains positive for the currency pair.

Resistance awaits at 1.2525, which has bee the high point earlier this week. The next level to watch is 1.2585, which held GBP/USD down in mid-July. Further above, we find 1.2645, which provided support back in June.