US Nonfarm Payrolls (NFP) report lands on Friday (6 August) and forecasters expect it to show an improvement on June’s figures, which came in with a gain of 850,000 jobs.The consensus for July’s jobs data is 880,000, although economists polled by Bloomberg pencil a slightly lower forecast of 859,000.However, if the jobs market is continuing to strengthen at the same pitch as last month, then those forecast numbers could prove to be a tad on the conservative side. Last month (looking at June data) analysts had expected a NFP reading of 700,000, but the actual figure of 850,000 represented a big beat.And the June jobs numbers followed on from a showing of 583,000 for May (revised upwards), confirming, retrospectively, an upward trend.With employers taking on more workers, the unemployment rate is predicted to fall from 5.9% in June to 5.7%. The June figure was a negative surprise, with economists predicting a lower 5.8% unemployment rate. Still, the Fed is pleased with the direction of the labour market, describing the latest data as representing “progress” in meeting its goals in that area, although it added that there was “still some ground to cover”.Those looking to trade on the binary implications of the NFP numbers may want to check out our guide to before doing so, with such events tending to inspire heightened volatility in the markets.Will US nonfarm payrolls progress stall as Delta spreads?However, economist forecasts aside, there is much to cloud the picture that may increase the margin for error to the downside. As we have been forced to got used to over the past 18 months or so, it is Covid that injects the greatest uncertainty, and in particular the more transmissible Delta variant of the SARS-CoV-2 virus.Covid will continue to play some part in keeping people away from work, but so too could another factor – the impact of unemployment relief, which some side is too generous and therefore discincentivises people from taking up employment opportunities. Having said that Dr Fauci, leading the federal Covid response, says he does not expect there to be another national lockdown attempt.And when it comes to job openings, there are plenty to be had, with data showing 9.2 million available in May (a record). Economists expect those vacancies to be filled over the coming months as the labour market continues to firm, notwithstanding the aforementioned headwinds.Another factor to take into account is wage levels, with anecdotal reports of employers offering signing-on payments to attract workers.In June hourly wages increased month on month by 0.3% to 3.6% on a yearly basis, just below the forecast 3.7%.Analysts at TD Securities expect that pace of increase to continue: “Some acceleration in the private sector is suggested by the Homebase data, while government payrolls probably benefited from favourable seasonal adjustments. We forecast another 0.3% m/m rise in average hourly earnings. The 12-month change is likely to rise again to 3.8% from 3.6% in June.”If you are looking for a to take care of your forex trading needs, have a read of our guide.Investors eye wages growth with trepidationWhat investors make of the wage figures on Friday may help to determine the nature of the response in the markets, with worries about inflation to the fore in a way that hasn’t been seen for more than a decade.Supply is struggling to keep up with demand not just in terms of commodities and manufactured products but in the labour market too, forcing companies to raise prices as a consequence as they seek to offset possible damage to their bottom lines.The Biden administration probably never imagined that inflation would be one of the unknowns that could throw it off course, but it is no longer far-fetched to start to think so. Some commentators blame the administration’s $1.9 trillion stimulus policies for helping to stoke wage-push inflation.But the enhanced unemployment benefits programme ends in September so that will present an opportunity to assess how it has been impacting labour market conditions and participation levels.however, JPMorgan markets strategist David Lebovitz points out that even where state-wide benefits have ended, pressure on wages continued.“These enhanced benefits have already expired in a handful of states, and even in those places you’re continuing to see wage growth. [But] at some point here, the well finally runs dry and people need to go back to work,” said Lebovitz.Nevertheless, most analysts think the unwinding of the stimulus support directed at the labour market should take some of the air out of wage inflation.Market watchers will continue to be concerned about the direction of the recovery and the impact on Fed policy as regards interest rates and asset purchase tapering. If the economic rebound shows signs of topping out then that could push projections for rate hikes and tapering even further out into the future.Dollar Index may re-test 50-day MA supportAlthough inflation is bad news for fixed income products such as bonds, judging by previous moves an undershoot on jobs data would likely see a rush to buy bonds, which in turn will lower yields and possibly weaken the US dollar and the dollar index (DXY), which measures the currency against major internationally traded peers.If the dollar weakens after the NFP data it could again threaten support at the 50-day moving average, confirming the downtrend since 21 July, although is showing signs of stability since the beginning of this month. 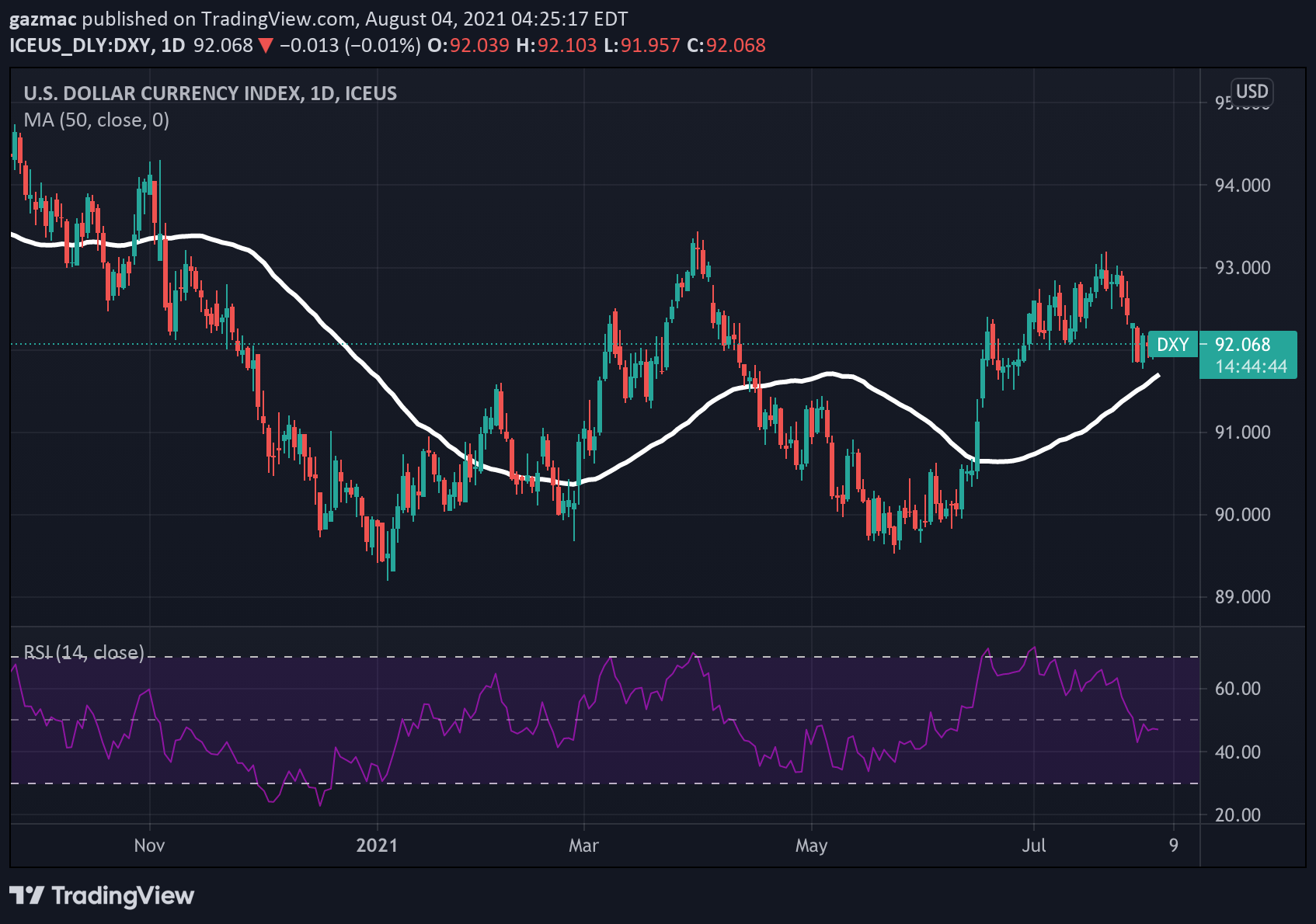 This week’s PMI data mixed on manufacturing, services; ADP employment data on tap; tapering prospects keyProviding some visibility on the state of the economy going into Friday, factory orders for June showed a month on month improvement of 1.5%, beating the forecast of 1.00%, although down from the previous months 2.3% m/m.This week’s manufacturing PMI data for July from ISM and Markit showed some variation, with Markit slightly above forecast (63.4 v 63.1) and ISM slightly below (59.5 v 60.9). A reading above 50 signifies expansion.Although the PMI data is somewhat mixed, TD Securities analysts are concluding that the reopening and stimulus booster effects are now spent: “Mixed but slightly positive signals from regional data suggest improvement relative to June for the ISM surveys. At around 60, the June readings were still consistent with strong growth, although both came off of recent highs (the 64.0 reading for services in May was an all-time high). The boosts to growth from “reopening” and fiscal stimulus have probably peaked.”US PMI services data and ADP employment change figures are due on Wednesday 4 August, while US continuing jobless claims are due on Thursday.Suffice to say then, traders are holding off making any big moves before Friday’s NFP data.Edward Moya, senior market analyst at CFD and forex broker OANDA, reiterates the importance to market participants of what the NFP numbers will imply regarding tapering. “The market is fixated on when the Fed will taper and Friday’s jobs number could determine how soon that may happen.”Looking to trade forex now? Invest at eToro!Capital at risk